As much as human beings complain about getting older, we don’t have it nearly as bad as our pets. Because they have much shorter life spans, they experience accelerated aging, which often results in age-related illnesses. Arthritis, heart disease, diabetes, hearing loss, and other chronic and degenerative diseases often affect our canine friends from middle age on.

Zola has always been super active and playful. I never thought of her as “getting old”. Not MY dog. It wasn’t until after we came home from VA from Thanksgiving that we were struck with the REAL TIME game changer. Zola had developed Glaucoma. I her into her regular veterinarian, and they performed multiple tests.  The doctors were AMAZED that she wasn’t wincing in pain. That’s the part that’s so hard about our beloved animals. They can tolerate pain much easier than us humans.   They used a small device called a tonometer that measures pressure within her eye. We were referred to the VSH Animal Hospital to their Eye Specialists. We were given wonderful advice and a few options. Bottom line, she would need to lose the eye. There was no saving her eye at this time. I had a cat a few years ago that needed to have an eye removed and he did just fine.  I was a little worried about Zola, being older. How would she adjust?

She had the surgery right away and we brought her home. She was loopy for a little while from the pain meds, but adjusted just fine. She bumps into walls here and there, but is living her life well!

These are few GREAT articles to read up on. Be on the look out. How to tell if you should be worried about Glaucoma in your pets. 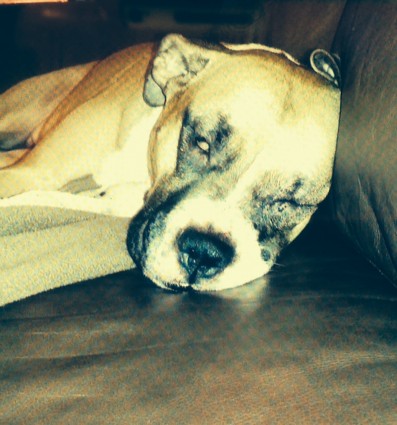